This week we celebrated two birthdays.

The time of the Librans one day after the other.

a few days earlier she arrived out of the blue although she said she had told her dad she was coming but  somehow that info didn’t quite get received.

John  had to take the boat trailer up to Narooma  for a blue slip rego check so we decided to meet up at Taylor Bros for birthday lunch.

He brought a bottle of Sauvignon Blanc from the Marlborough Sounds and that went down perfectly with our fish, chips  and salad on the deck.

After wards we basked in the hot hot sun on the shore of Wagonga lake .

8 candles were lit  on the fudgey chocolate cup cakes Jess had made that morning and we sang a happy birthday to Zoe song.

Kingston played in the shallows in the way Zoe and her sisters  had some 20 odd years  earlier.

The circles of life turn and turn again.

It was a bit of a  family tradition to come and hire a boat from the two grumpy old men that were the original Taylor Bros. They are long gone now but happy memories of our playing here remains.

We would all pile in an old clinker and putter up the to the far reaches of the inlet past the oyster leases and back down as far as the bridge with the dragon under it,trailing our fingers thru the water   dreaming the dreams of ocean and fish and mermaid.

John went off to complete trailer business so Zoe and I checked out the op shops.

Jess and Greg and bub went on to Bega to meet her dad who has come to stay with Elsie Rose for a week. must be the time of year for family gatherings something to do with renewal no doubt.

it may be that Zoe is the only person in Australia to own a stoat box, found in the secondhand store on the hill .

I am not sure why it is called a box when it is more of a case ,made of wood  with a top that half of which  hinges open to reveal a small cavity.

But what’s it for? I asked.

For hunting the lady tells us, the stoat goes in there to take it hunting.

Well knock me down with a feather.

How does it breathe is my next question and do they really like dark confined spaces?

Zoe has to buy it, after all she has just bought herself an apartment in St. Kilda  and obviously a stoat case is an essential item.

Well I could put potatoes in it she said or …  anything really.

It is beautifully made 19 inches long 5 inches deep and 10 inches wide, all separate pieces of polished wood joined together impeccably .

Zoe has always loved from the very big to the very small,  as a toddler she would eat her porridge with the tablespoon or use the tiny tiny silver spoon, nothing in-between will do , which means a stoat box is a perfect companion .

we all had our fingers crossed but still weren’t sure if we were sailing or not.

this was Johns dreaming ,

we were organised, I was picnic ready and  just waiting the signal.

John got up very early to complete the mission and mission it had been , months of restoration; of scraping and varnishing , replacing and renewing, painting and fixing until  by morning tea time pancakes he pronounced it a goer.

The day unlike the intense heat of the day before was cool to cold, cloudy and blanket grey with no wind.

We drove  to Beauty Point on Wallaga Lake where we have sailed before albeit many years ago.

We sat at the picnic table and ate the spanakopita I had made the day before with salad and Turkish bread rolls.

The spinach pie was extremely good and I wonder why it had been so long since I had made one.

Into the water she slipped oh nameless blue boat.

We clambered on board tipping and squealing and left the shore,only to discover that the wine cork  John had used instead of a bung was leaking.

Zoë came to the rescue placing her hand over  the offending leak and holding it there awkwardly among a lot of giggles some of which were hysterical but we won’t name names .

we made it to the other side of the lake , John jumped out went ashore and came back with a stick.

The stick was put in place  and Zoë got her arm back.

Kingston and I sat up the front on the deck , he prattled away none stop already a sure sailor.

he ate two oranges, made me sing him row row your boat 100 times and christened granddads boat with two wees.

I suggested holding him at the edge to pee overboard but was met by derisive laughter that still continues and has grown bigger in the telling.

stories of me stretching his peer over the side which isn’t at all what I  was intending  but they will have their fun, this mob.

Jess sprawled over  the middle bench where she breathed and coached herself towards relaxation. successfully too.

Greg moved from the bench  to the floor to keep out of the way of the pole at the bottom of the sail that swings wildly at times when catching winds.

Zoe was on the back seat and John  with her holding  a rope in one hand guiding the sail and a tiller in the other though occasionally the rope would be thrust at Zoe while he managed something else.

It was cold and the lake was a grey day green.

We rocked around bobbing up and down ever so gently and not really going anywhere; it was a long time returning to the place we had left from.

We passed a sand spit where pelicans stood, we watched kids towed behind a speedboat, other boats zoom by to a cove to lay anchor and cast out a line.

we looked up at  sea eagles circling and all the time Gulaga Mountain lay quietly shrouded in mist .

Why can’t you just point it where we want to go? asked Zoë, because it doesn’t work like that ,John said.

You have to catch the wind so that it sends you there.

It is a different way of going somewhere or maybe it isn’t about going anywhere at all, maybe it is about surrendering to the elements and going where they will.

Still the cup of tea and baklava that I had made as birthday cake were calling and bit by bit John maneuvered  the sail the wind and the boat closer and closer.

About 100 metres out he resorted to Zoë’s paddle that she uses for her SUP board and rowed us in.

It was a  wish wished by John

a dream come true to celebrate the 65  years with a sail.

He pulled it off.

he took his family out for an  adventure introducing us to the sailing away for year and a day to the space  where anything goes. 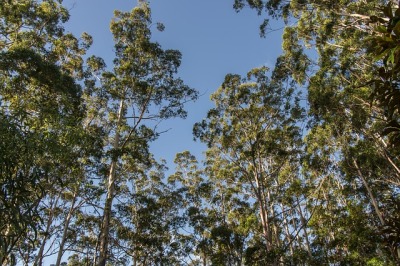 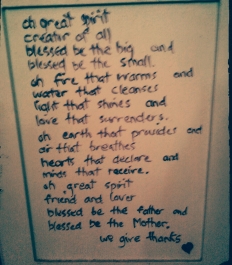 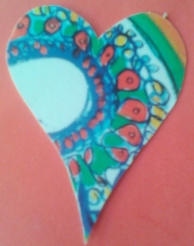 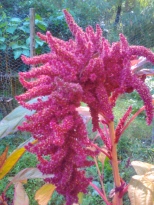 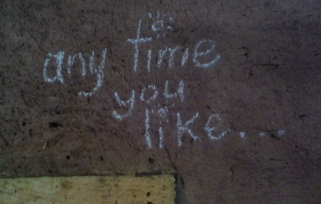 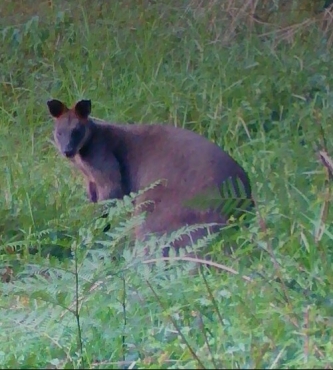 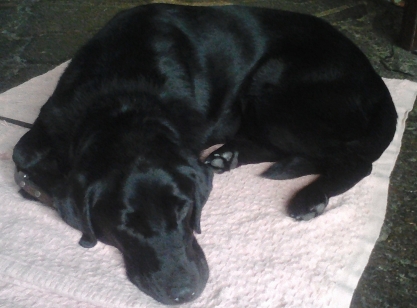 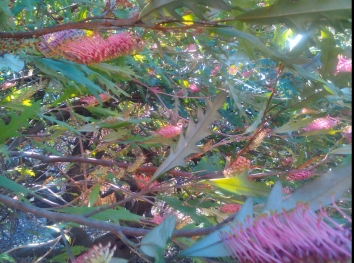